An Unholy Union: Deepak and PBS

Over the holidays I wasted an hour watching PBS.  It was yet another fundraiser, but this one unfortunately featured a pseudo-science lecture by the charlatan, Deepak Chopra.  By donating just a $150 (!!) to your PBS station, you get his most recent book (What Are You Hungry For?), related DVDS, and neuro-associative conditioning (NAC) wristband and other crap.  Using classic infomercial style production, the PBS show include close up of shots of the audience, nodding and smiling, while Chopra throws out meaningless one-liners like “The word ‘body’ is not a noun; It’s a verb.”  What junk and why is PBS airing this? 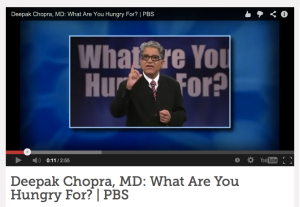 The host of the show, who I did not recognize gave some hints.  First and foremost, PBS stations want money.  I understand that, but why not do it by shows with real science, in the spirit of  the award-winning PBS series Cosmos:

Cosmos covered a wide range of scientific subjects including the origin of life and a perspective of our place in the Universe. The series was first broadcast by the PBS in 1980, winning an Emmy and a Peabody Award. It has been broadcast in more than 60 countries and seen by over 500 million people, making it the most widely watched PBS program in history.

Instead it was Chopra, about which the PBS host ironically and unintentionally said “This is the kind of program that you expect from PBS”.  Yes.  Unfortunately, our expectations for PBS has been reduced to seeing pseudoscientists, along with Celtic Thunder (yet, again), cooking shows, and the like, during fundraising season.

The PBS host then had the gall to compare the Chopra drivel to Masterpiece Theatre, The PBS Newshour, and Nova.  What PBS needs to do is run a NOVA special on scientific charlatans, like Chopra.  They can start by interviewing Jerry Coyne, who writes:

I won’t respond in kind. Instead, I will simply proffer you a poem that you are free to use as your own mantra. It’s set to the tune of the old Helen Reddy song, “I am woman.”

I am Deepak; hear me roar
As you patronize my store,
And buy up all the nostrums that I sell.
You may say that I’m a crank,
But just tell that to my bank,
For I’m Deepak, and you can go to hell.

Oh yes, I am rich,
Though it’s richness born of woo;
And for those whose life’s a bitch,
I will bilk them through and though.
If I had to, I could sell anything;
I’m a crank,
But I’m a scientist—
I am DEEPAK!

It is worth noting Chopra’s history of scientific failings, which include seeking cash over content:

In 1991 the Journal of the American Medical Association (JAMA) published an article on Ayurvedic medicine which Chopra had co-authored. JAMA subsequently published an erratum stating that it had received information of undisclosed financial interests from Hari M. Sharma, the lead author followed, on October 2, 1991 with a six-page Medical News and Perspectives exposé written by JAMA associate editor Andrew A. Skolnick, who characterized the paper as a “thinly disguised advertisement for the Transcendental Meditation (TM) movement and its products”.

As for those wristbands, they are apparently a reworking of the negative ion wristbands that were Steel City Skeptics commented on previously with just a different cover story.

Enough is enough.  PBS needs to get serious about science and leave the charlatans to late-night infomercials, which unfortunately is the exactly the kind of program I have come to expect from PBS. 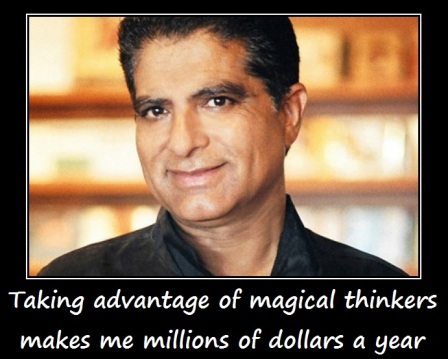 2 Responses to An Unholy Union: Deepak and PBS